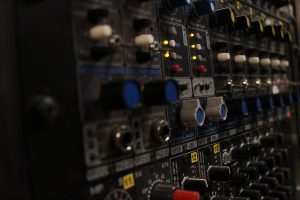 It all started in the early 90’s. The guitar player of my first band had a Fostex 280 four-track cassette recorder, which I bought off him and started experimenting. Piece by piece I started building my setup around it and stretching it to the limit basically. I was playing death metal at the time and used my home studio to record some stuff with the band I was in, making fumbling attempts at trying to imitate the production aspects of the records and demos I listened to.

Around the same time, the black metal scene was emerging in Sweden and I ended up recording the debut demo of a local act called FUNERAL MIST in the summer of 1995. This was my first time recording other artists and the first item that actually got released to the public. Other local acts took notice and the very modest studio started growing. Eventually the limitations of working with only four tracks started to become very obvious, and I invested in a large mixing desk and a 16-track reel-to-reel tape deck.

With the step up to a more professional setup, working out of my parents’ house didn’t really feel like an option anymore so in the spring of 1997 I managed to find a bomb shelter (Sweden is teeming with these since the cold war era) in Spånga, a suburb of Stockholm, that would serve as a studio for the upcoming decade. The very first act to record there was a band called GOAT WORSHIP from Uppsala, and I remember being up all night soldering the multi-core before they came, clearly underestimating how long it was going to take. (Don’t really know if that recording was ever released.)

Stockholm wasn’t exactly void of good studios at the time, but there were a lot of unsigned bands that didn’t have much of a recording budget and our low prices could cater for that market. But perhaps more important than that, I had decided to focus only on extreme metal, which inevitably cut out a large share of the market but in return allowed me to become more specialized in the genre, which was very much appreciated by the bands that came to record.

The early days in the new locale spawned a number of very interesting recordings with second wave black metal pioneers like FUNERAL MIST (who I had started playing with by then), MALIGN, OFERMOD, TRIUMPHATOR and WATAIN, as well as countless demo recordings with smaller acts, including some very early work with bands like INSISION and IN AETERNUM.

The studio grew from 16 to 24 tracks, and more and more bands started to show up. The balance started shifting from primarily demo work to more and more actual releases, including albums by WATAIN, ARMAGEDDA, ONDSKAPT, BERGRAVEN, NOMINON, HERESI, CORPUS CHRISTII, MERRIMACK, ADORIOR, and so on.

Eventually the company renting the space on top of the studio grew tired of the noise (the bomb shelter didn’t exactly accommodate for creating an ideal recording studio environment with proper sound isulation) and the rental contract was terminated by new-year 2007. By sheer luck a new locale was found in Alvik outside of Stockholm. In April 2008 BERGRAVEN became the band to inaugurate the new place.

The Alvik studio has been the birth-place of quite a number of albums since then, including revisits from bands like WATAIN, ONDSKAPT, VALKYRJA, BLACKLODGE, MERRIMACK and NOMINON, as well as new acquaintances like DESTRÖYER 666, DESULTORY, UNANIMATED, DEATHCHAIN, RAZOR OF OCCAM, PORTRAIT, INFERNO, MASSGRAV, TRIBULATION…the list goes on!

2019 saw the birth of a new facility in the NBS branch, after acquiring a former baptist church in Söderfors north of Uppsala. It was run in parallel to the Stockholm studio until mid 2021 when the latter was finally emptied and sold. The new studio is by far the biggest undertaking in our history and is a constant work in progress, but a very interesting and rewarding one. The main hall is used for the studio, giving us a nice, big space to work with, with a more than generous ceiling height. Ideal for large, thunderous drum sounds.

While still staying true to the extreme metal roots, later years have also sparked an interest to broaden the spectrum a bit, with works of JESS AND THE ANCIENT ONES sticking out as a prime example.

Apart from full productions, the studio has also become more and more sought after for mixing and mastering work, saving bands the need to fly over to Sweden to do the work. A more decentralized approach as of later years has also been to fly out and work with bands on location rather than to fly the bands in. All in all, our goal is to always find a way to accommodate for different types of scenarios and conditions, giving the client a product that both them an us are happy to put their stamp on.

This may be a good place to introduce yourself and your site or include some credits.